Just like a lot of poeple out there, I find google translate quite useless. It's good for translating single words sometimes or to get the gist of a sentence or text, but to translate something 100% correct is almost impossible. I started off translating a few words and sentences from Swedish to English that I would imagine to be difficult to translate. Those were words and sentences that you find in all languages but that cannot translate into another. Some languages simply have their own words for things based on what culture and traditions that country has. This culture or tradition might not exist in a another country and is therefore impossible to translate into that other language. 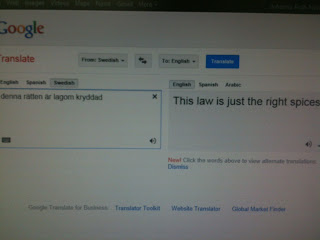 The sentence I have translated here are "denna rätt är lagom kryddad", which kind of means; this dish is well spiced. The word "lagom" is a word that only exist in Swedish. It means something that is in between too much and too little, in other words it's something that is middle-ground. Sweden is the country that is famous for always being in the middle. You should not make more money than anyone else, you should never do better than anyone else, never be louder, funnier etc. And if you are making more money, doing better, being louder, being funnier, God forbid that you let anyone know about it. This is why living there can be quite frustrating. Everyone should be equal and the same to the point where it become ridiculous. In many ways it is similar to Japan. I thought therefore that a sentence containing this word would demonstrate this. The very simple word for dish has also been mistaken with "law".

A classic example of when google translate has been suspectedly used is when going to restaurants, bars and shops here in Japan. Some of the signs that have been put up is hilarious and has clearly not been double checked by anyone.. This is very funny..